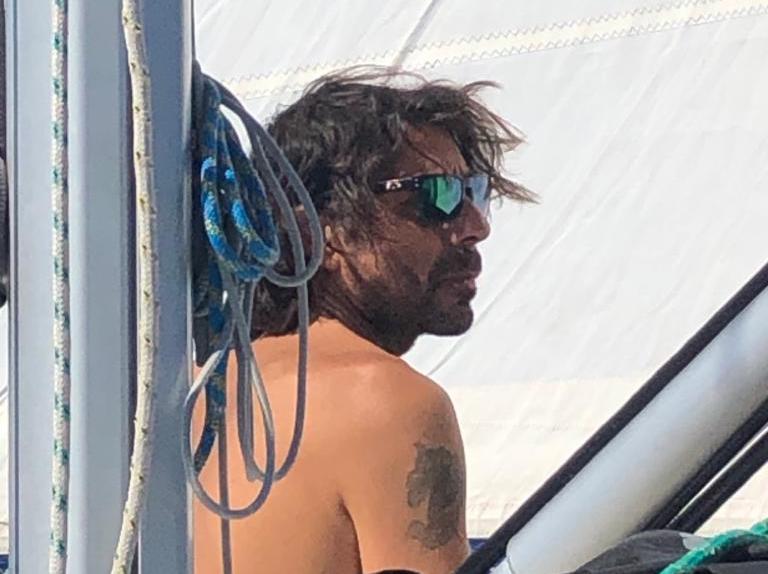 It’s been a while since I’ve written on the blog, and I’d like to take stock of the situation…
Katabasis was an idea born in 2005, after years of teaching sailing and diving and immediately after my first course for freediving instructors in 2004 (with Apnea Academy, for the record). I held my first courses in the pools of Ferrara, but I had an idea in my head: to open an office in a beautiful place! It was 2007 and it was then that I decided to open the Casa del Mare on the island of Elba. 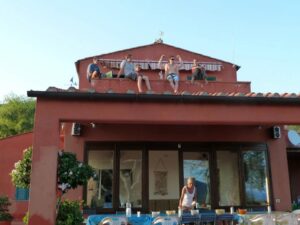 It was an immediate success! Many freedivers spent unforgettable moments there, finding everything they were looking for. I had in fact applied, quite unconsciously I must say, the concept of the Surf House, transforming it into a Freediving and Sailing house. There was room for everyone and everything: the conviviality and fun combined with daily practice made the first freediving centre in Italy a happy case in the European panorama, attracting freedivers of all levels, recordman and leading figures in the freediving world with whom I organized workshops and stages; William Trubridge, Jean Jaques Mayol, Federico Mana, Maurizio Ramacciotti, Mike Maric, Davide Carrera, Marina Kazankova to name but a few. Along with them, many Apnea Instructors began to use the facility to offer their students the “ideal location” to complete their courses. Spearfishing enthusiasts also began to make their appearance (and they brutally involved me…) and even sailing students seemed to like the place: in short, the Casa del Mare had become a magnet for sea lovers.

Then, as often happens in my life, at a certain point I felt the need to renew myself, and so 2017 was the last year of that fantastic adventure which in the meantime had lasted 10 years. In spite of the regret that many people still show me today, I decided, without any regrets, to leave Elba, to detach myself from the concept of reception (board and lodging) and dedicate myself solely to teaching Apnea, Sailing and Spearfishing, looking for a base further north. 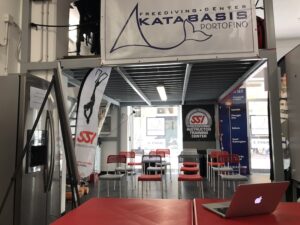 It was 2018 and the new location became Santa Margherita Ligure and the Portofino Marine Protected Area; for two years the watchword was: Belin! After two years of intense activity, I realized that Liguria was too narrow for me to stay permanently, also because the desire to discover new things was not (and I hope will never be) over. 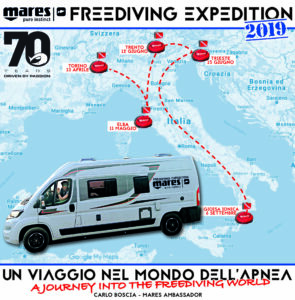 So after two years of ” focaccia al formaggio”, in 2019, as my relationship with Mares grew stronger and stronger, I organized a project called “Freediving Expedition”. Driving a camper with the necessary equipment for myself and my students on board, I organized freediving promotional events in various regions of Italy, such as Trentino, Val D’Aosta, Puglia and Sicily. Not content with that, I also ventured into seas full of mysteries such as Malta, the Azores, Greece, Corsica, Scotland and Andalusia. A fantastic year!

The year 2020 arrived and with it the cursed pandemic, and as it often happens (those who sail the seas know this well) this terrible moment was also an opportunity to look deeply inside. My life was leading me to look for a new place to live, and feeling nostalgic for Tuscany (but not for the asphyxiating ferries to Elba), I chose a magical place to start again: the Gulf of Baratti, in the middle of the Etruscan Coast.
Today, I think I had intuition and luck, as in all the good things that happened to me in life :-) 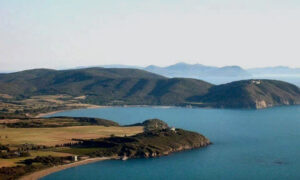 Tuscany (re)welcomed me with its sly, multi-faceted smile; an incredibly beautiful sea, close to the islands of the Tuscan Archipelago, with a dignity almost unknown to many, which literally won me over. The echo of the unique ancient Etruscan port of Baratti, the stories of the people who live there, the enveloping nature that, thanks to the historical importance of the place, has not been disrupted by building speculation, made me choose this place to live my next life.
Here I felt the right energy to face this difficult situation which, in its infinite tedium, also seems to be telling us a lot of things, from a social, economic and above all environmental point of view. This is where Katabasis started again!
Of one thing I am sure: all of us, especially those who work in contact with the sea, can not pretend nothing and passively hope that things go back to the way they were before; something had to be done … why not include information material on environmental issues that GREENPEACE makes available during the conduct of activities proposed by katabasis in close relationship with the sea?

In fact, thanks to an interesting agreement with the authoritative environmental organization that I have been following personally for more than 20 years, we are preparing the materials to be included in the courses (but not only) that will take place in Baratti, but also in Liguria, Sardinia, Sicily, in short, wherever the sea takes me to carry out my profession/passion. Therefore, during a freediving lesson or a sailing cruise, or even (I would say especially) during a spearfishing course, we will talk about micro-plastics, intensive fishing and exploitation of the sea and protection of cetaceans.
All this, from 2021, is a reality!
This is just the beginning, and it’s good that all those who have followed me during my last 15 years of activity (I started teaching sailing in 1991…) know what’s happening in Katabasis and, like me, take the opportunity to become active in protecting the Sea, our irreplaceable playmate, today more delicate than ever!