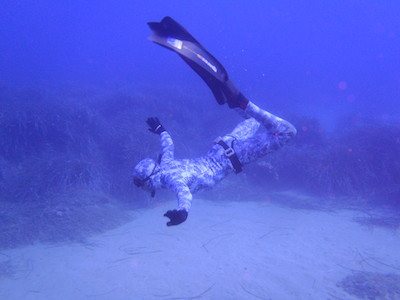 Things have changed a great deal on the national and international Freediving spectrum since I first started teaching Freediving courses back in 2004.

Many more people have taken up this fantastic activity, which as each and every freediver knows requires both a physical and mental involvement. Following the first revolutionary teaching methods created in around 1995 which subsequently substituted any preconceptions that Freediving was linked to the “super human“, other teaching methods but most importantly other men got involved in the development of these teaching methods put together to be accessible to an increasing number of people.

We needed to make yet another step forward before the concept of Freediving for the super human had passed. At that point the idea of freediving and well-being could then be considered, but until then it was all still performance related; “Keep relaxed and de-contracted and you’ll see that you go down the diving wire better”.

With this little example, many freedivers attracted by the fantastic images of men delving even deeper, and of dolphins smiling even wider, broke free from e Freediving concept that didn’t always represent what their immagination had previously suggested. Maybe something was still missing in order to get “the ordinary man” involved, attract him to a Freediving course and eventually get him hooked.

During one event the slogan read “It’s not scuba, it’s not snorkeling…it’s called Freediving”!! The picture was of a freediver relaxed at several meters deep surrounded by a fantastic blue light. The poster made me think insofar as still to this day the activity of Freediving needs to be explained; if you say football, people not what it is, if you say cycling people immagine what a cycling race or bike ride is, but if you say Freediving??? 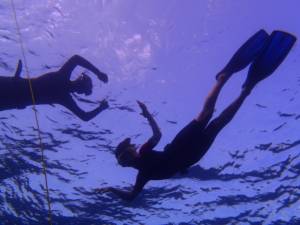 The common man generally when asked, starts to think about Great World Records, about dream-like images that at the same time made our parent’s generation and us as children tremble…it’s crazy to think that if we did a survey today in the year 2014 most people would still be thinking about exactly the same images as they did back then: the Great World Records of depth.

Maybe those responsable had made some sort of error and considering myself as having been one of those people, I am asking myself and trying to find the reasons and the solutions. What comes to mind as being a solution is to present a simpler kind of Freediving, one without ambitions about depth, time or distance;

“Freediving that is measured is terms of sensations and not in meters, where physical and mental relaxation are not a means of achieving a numerical goal, but a real result and point of arrival.”

This is what someone should really be thinking the moment they get asked what Freediving is to them; they should not necessarily be thrown into a whirlwind of meters and minutes. They should think about the possibilities of getting close up to a fish that is suspended within the current and that it is possibile to glide along a rock face again and again independent of whether this be at 5, 10 or 30 meters.

They should think of how beautiful it is to be in the Sea and feel part of it, because you feel at ease with yourself, without needing anything much else but to hold your breath.
This is what I believe has recently started to take foot and attract unsuspected enthusiasts: recreative Freediving. We are finally starting to break the barriers that for years made us lets say involountarily (?) select even beforehand a whole series of people that even though they could so and wanted to try and get close to our underwater world, in the end gave up; sometimes even after having completed their first Freediving course, being even more significant.
They are those people who after completing a winter course in the pool were during various months brought to do “The Sea exam”. This “Exam” (even calling it an exam was completely inappropriate) consisted of 3 to 4 trials almost entirely using the dive wire: duckdives, Constant Weight, equalisation, finning. Some of the students undoubtedly remained, enduring the irresistable fascination of the Deep Blue, but how many said goodbye in order to occupy their free time with something much easier and simpler, like Zumba???
In conclusion, I also believe that by widening the flower petals of potential freedivers, going spearfishing with them at Sea which was maybe unexplored until now (to use a relevant metephor), might help us to find who has a passion for time, depth and distance, and as a result also the sporting world for which I hold great respect, and which as a consequence would benefit.